To walk around the Morgan factory is an very sensory experience. This is not like most sterile, clean and automated car factories. This is a place where the smell of newly cut ash for frames are mixed with the resonating sound of aluminium panels being hand beaten into shape. An atmosphere like no other, it feels like time have slowed down, allowing handbuilt wonders to be carefully and lovingly created by skilled craftsmen.

The Morgan factory near the Malvern Hills

Established in 1909 by H.F.S. Morgan, the Morgan Motor Company is known the world over as an iconic British automotive manufacturer, famed for creating sports cars that boast a unique blend of craft, heritage and pure driving experience. The ideology at Morgan has remained unchanged for over 100 years: from research and design, to paint and trim, every Morgan is hand crafted for the customer at Morgan’s Pickersleigh Road factory at the foot of the Malvern Hills.

It all started with the design of the now iconic Morgan Three-Wheeler. This was followed in 1936 by the Morgan 4-4, which continues to be produced today, and is the longest-running production car in the world. The mindset at Morgan has remained unchanged for over 100 years: from research and design, to paint and trim, every Morgan is coach built for the customer at Morgan’s Pickersleigh Road factory at the foot of the Malvern Hills.

To walk around the Morgan factory is an very unusual experience. This must be the only car manufacturing company which welcomes people to come and visit, to walk around the shops seeing the cars being made.

The structure shop is where the core mechanics of the car are put together. As you would expect the engine, drive-train and gearbox are all settled in before being wrapped up in body work. The picture shows the traditional Morgan Plus 4 ladder-style steel frame with a sliding pillar front suspension and rear live axle with leaf springs. The later Aero series cars are based on a bonded aluminium chassis formed from jig-bent panels and massive extrusions.

Morgan production starts in this shop. Each platform is carefully hand-assembled by our expert technicians. Engine, gearbox and package configurations are defined around a lightweight, high-performance structure. The rolling chassis undergoes a rigorous series of electrical, engine and quality tests before the addition of bodywork. Morgan Motor Company has installed many different makes of engine over the years, including, in roughly chronological order: J.A.P., Blumfield, Green-Precision, M.A.G., Anzani, Blackburne, Matchless, Ford, Coventry Climax, Standard (Triumph), Rover, Fiat, BMW, and S&S. Additionally, H.F.S. Morgan used a Peugeot engine in his first prototype, a Dorman engine was used in the 4-4 prototype before Morgan decided they preferred Climax engines, and a Buick "215" was installed in the first Plus 8 prototype because Rover couldn't provide a sample expeditiously. A QinetiQ hydrogen fuel cell and a Zytek Automotive electric motor have been installed in recent show cars.

Although the earliest Morgan three wheelers used French black poplar for body subframes, Morgan soon switched to ash wood. Belgium was traditionally Morgan's preferred source, despite occasional problems with embedded world-wide-era shrapnel. Some find it difficult to believe that the Morgan cars are made from wood in this day and age, but this is a crucial factor that allows Morgan to stand out from the rest. Some may also be concerned about safety, but apparently it is in many ways safer than a metal car. It’s safer as wood flexes, and due to the flex of the wood, the car protects its occupants better. 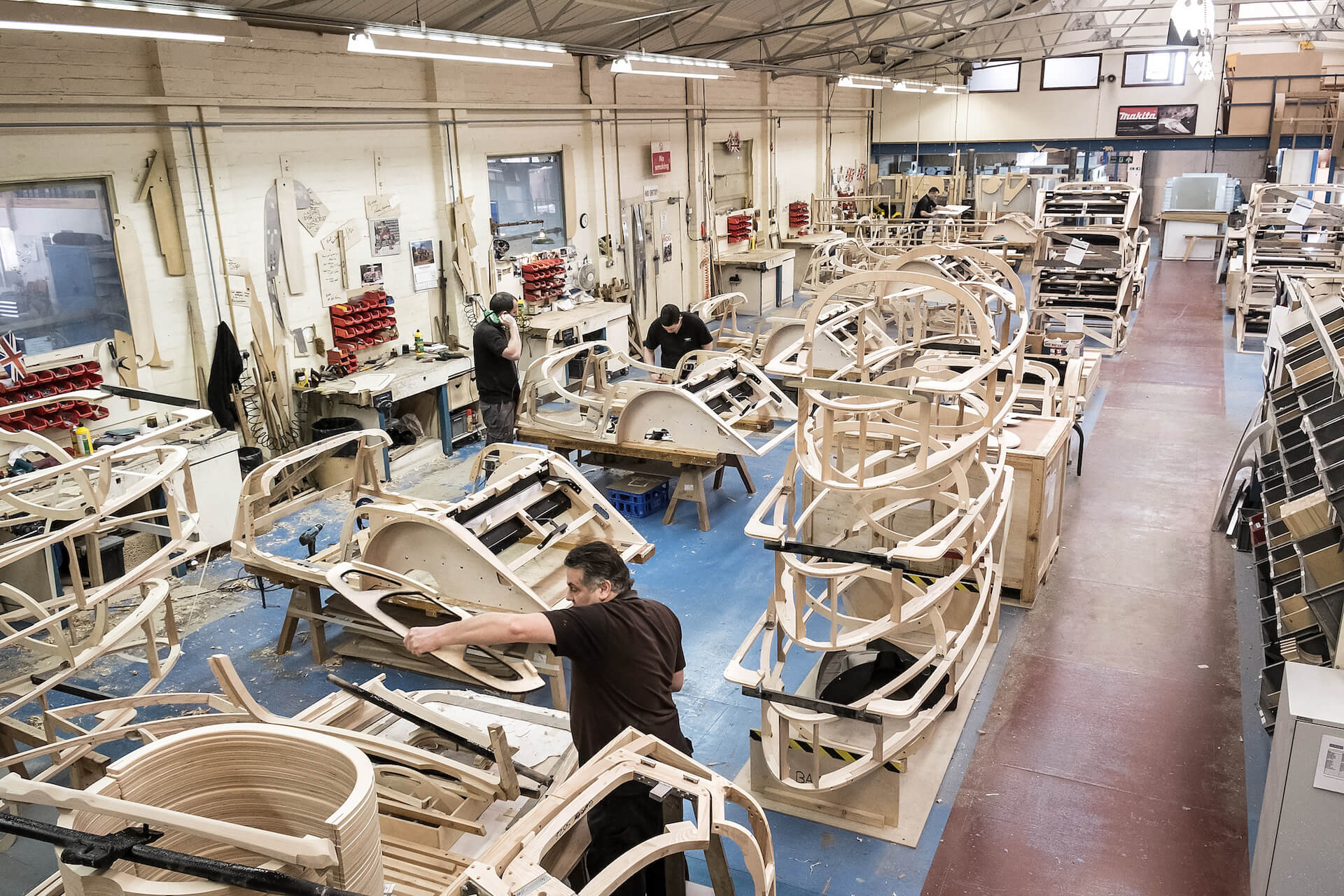 Strength, toughness, straight grain, and a minimal number of knots are basic characteristics Morgan requires - but they also require wood that can be formed to shape. The more gently curved parts in the centre were formed in bag presses: a plastic film is set over the wood and a vacuum pump pulls the film and wood into shape. Deeper curves are formed with mechanical clamping.

The cure time of the glue that's currently used is about six hours, which limits production of Classic series cars to about two per day. After the glue cures, the rear fender arches are trimmed to width on a bandsaw. The width required varies from model to model. The formers in which the fender arches are made, are exactly the same tool as have always been used. The wheel arches are laminated using several sheets of ash, glued together and formed into the mould using clamps.

Morgan employs approximately 177 people. Nearly all of them started with the company as apprentices. The result is an exceptionally well seasoned and loyal workforce.

Every Morgan car is accompanied by a build book as it travels through production. Each production stage has its respective page. As technicians complete their work, they autograph the book. For an extra charge, Morgan includes photographs of the car's assembly.

Even on the top-of-the-line Aero models, aluminium body panels are tacked to ash wood. In recent years, Morgan has increasingly utilized laser cut blanks from outside suppliers rather than cutting aluminium to shape in-house. Still, a number of small foot operated shears like this one are necessary for low volume and custom work.

Most people know what a Morgan looks like, but are everyone aware the bodywork was mostly built from hand crafted sheet metal? 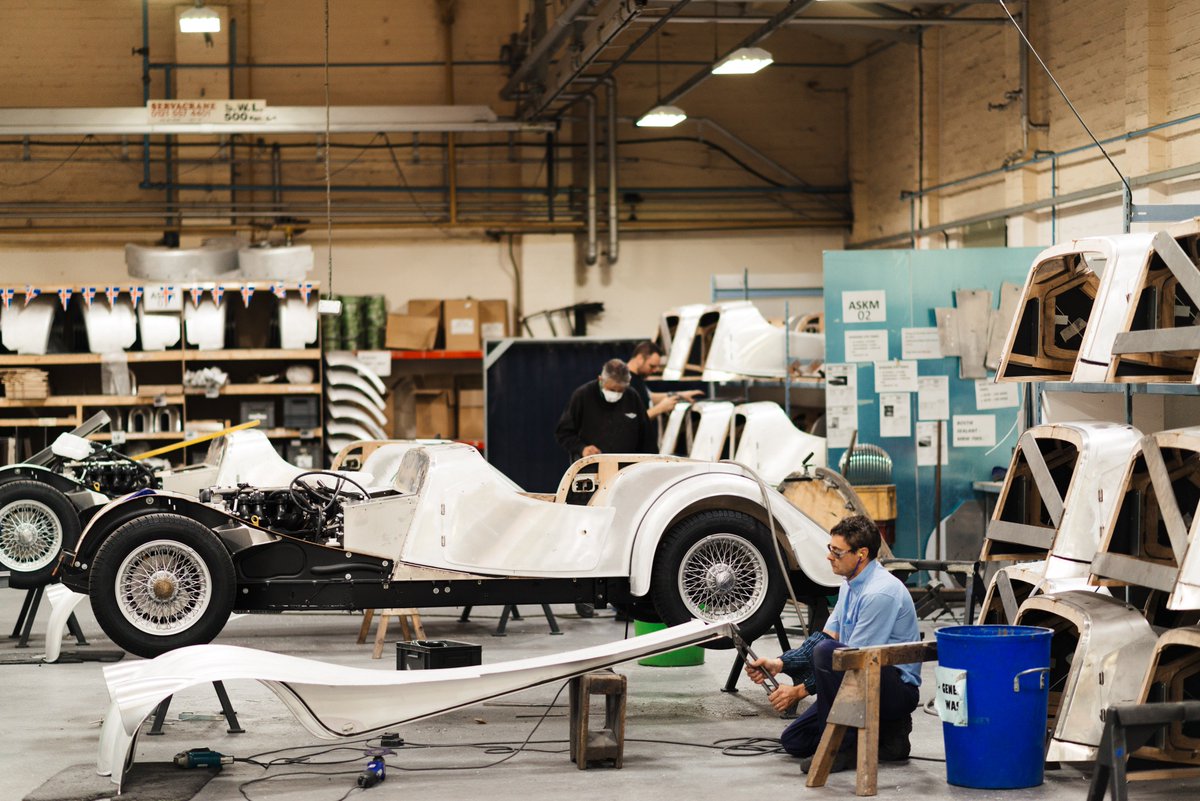 The sheet metal is transformed into a bonnet section of a Morgan, just using a hammer and a block of wood. There aren’t many car manufactures around that do this kind of work any more.

Classic series bonnets are still made and trimmed one-at-a-time by very highly skilled craftsmen. Wings and cowls are no longer made by hand. Instead they're formed using the SPF (blow moulding) process, similar to how the Aero bodywork is constructed.

After the highly skilled work of shaping, hammering and folding the aluminium panels to fit the ash structure is complete, you can see the familiar shape of the traditional Morgan emerge. 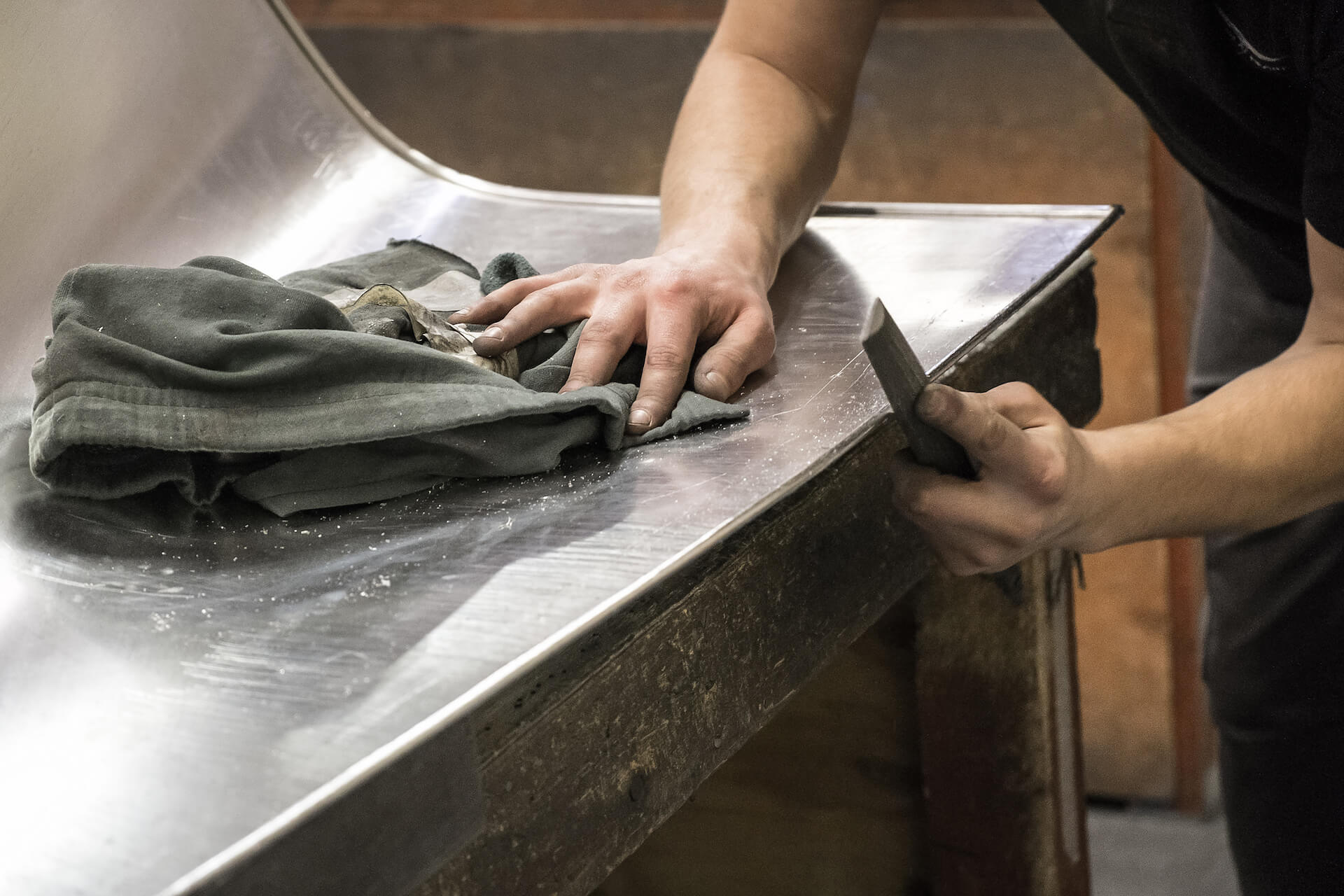 After all panels have been carefully made, the chassis and body are united. Morgan still make most of the metal parts themselves. The bonnet is the most complicated part to make, and it is still ‘rolled’ by hand before it is fitted to the car.

In the exact same manner as in all years of Morgan manufacture.

Still no paint, of course, the Morgan is still softly shining in its bare aluminium skin. Before the paint can be applied there is the painstaking work of sanding out every tiny imperfection. The workers put their pride in the parts made, and each bonnet still have the initials from its maker stamped in the metal under the hinge.

The manufacturing process use a mixture of hand cut and Laser cut blanks which are very skilfully shaped and panelled onto the body frame, which exemplifies the traditional skills of the workforce. 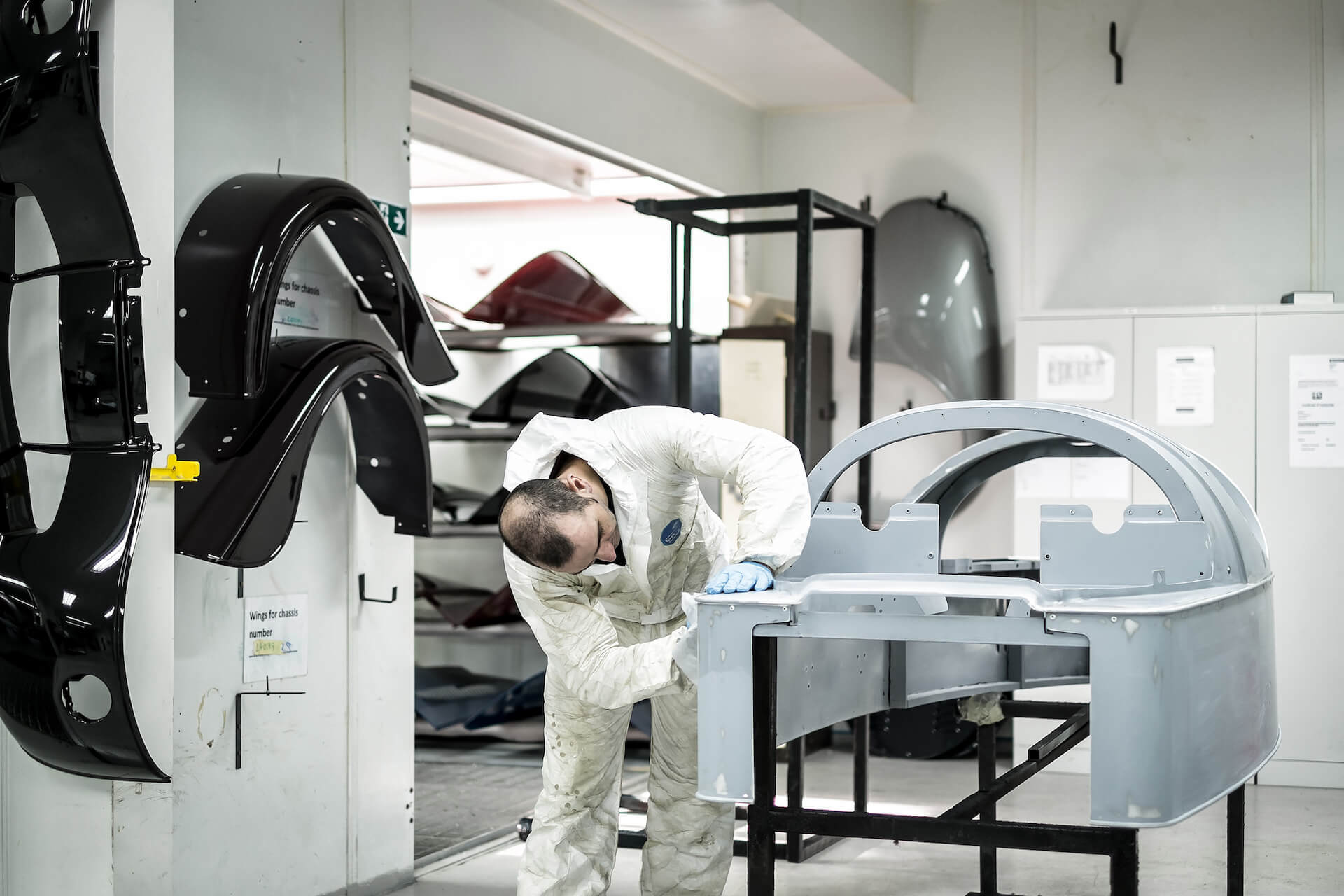 Wings and bonnets are removed and cars are mounted on trolleys for painting. Installing panels to check fit and then removing them before painting is inefficient. Morgan is working to get variance out of their build so they can streamline this. Note: Morgan was one of the first auto manufacturers to convert to environmentally-friendly waterborne finishes.

Morgan do have standard colour in the model programme, but most Morgan's are ordered to personal specification when it comes to paint scheme and interior details. If you ever encounter a pink painted Morgan, chances are that this colour is very original, and applied to the car when it left the production halls. 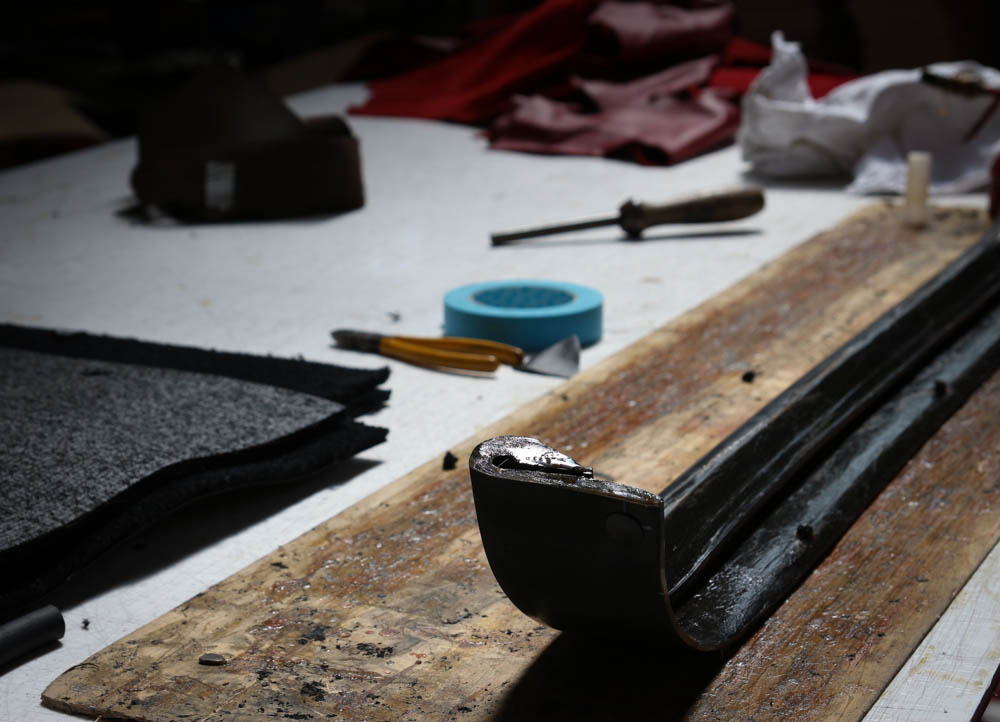 The trim shop where all the interior parts of the car are installed, from seats and door trim, to dials and radio. The cars are rolled in, individually built to the specification and then rolled out on to the next section. Each car takes around 30 hours to complete.

Electrical wiring and interior trim is installed before wings are reinstalled. Morgan sources their leather from Scotland. There's very little barbed wire in Scotland, so their hides include fewer scars.

The atmosphere in the trimshop is a buzz from sewing machines mixed with the smell of contact glue and the sound of hammering nails. 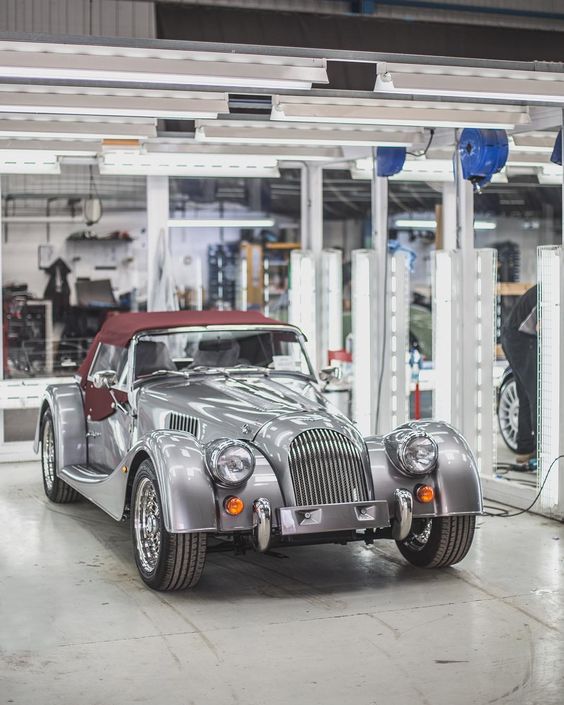 All Morgan cars are road tested, then given a complete technical PDI. Repairs are made, and then underbody corrosion protection is applied. One more inspection, and then the vehicle is prepared for shipment. Many Morgan's are shipped directly to customers.

Morgan is the very last family-owned brand still producing cars in the traditional method. The firm employs more than 200 people working in factories throughout the whole site, which is the largest Morgan has ever been. Making around 760 cars per year, more cars than ever before, Morgan is arguably the biggest niche company in the automotive trade and sports car market.